As xMOOCs become more successful and begin to experiment with pedagogies that go beyond the didactic video lecture approach, I have been trying to understand the essential differences between the original connectivist MOOCs such as CCK08 and the current xMOOCs such as those offered by Coursera.

I have now had experience of two xMOOCs – Growing Old Around the Globe (convened by Sarah Kagan and Anne Shoemaker) and Modern & Contemporary American Poetry (convened by Al Filreis). Both these xMOOCs have been very successful. They have reached large numbers of people, established communities of learners around them, promoted interaction and discussion, involved participants in peer review and used teaching assistants to support participants. So if we take these as two of the best Coursera MOOCs, then what are the differences between these and the original cMOOCs such as CCK08, PLENK, Critical Literacies and Change 11? What follows is my current understanding, based on my experience in these MOOCs and what I have recently read and heard from Stephen Downes and George Siemens (see references at the end of this post).

CCK08, the first MOOC, was an attempt to put the theory of connectivism into practice. Connectivism as a theory is still being questioned, but

‘at its heart, connectivism is the thesis that knowledge is distributed across a network of connections, and therefore that learning consists of the ability to construct and traverse those networks’. (Stephen Downes – What Connectivism Is).

I am not aware of any evidence that xMOOCs have been specifically designed to test out a given theory.

Connectivist MOOCs  (cMOOCs) are distributed in the sense that they do not run on a single website or with a centralized core of content; the content in cMOOCs is networked. Participants are encouraged to meet in locations of their choosing and organise themselves. xMOOCs are convened on a designated platform; they may offer alternative sites such as Facebook or Twitter, but the course runs principally on the main platform, where interaction takes place in discussion forums. Blogs, for example, are not a big feature of xMOOCs.

cMOOCs are designed as massive networks. The idea is that these networks are neither centralized, nor decentralized, but distributed so that the collapse of a given node or set of nodes does not cause the collapse of the entire network. cMOOCs are based on networked cooperation rather than group collaboration – (See Downes on Groups and Networks) 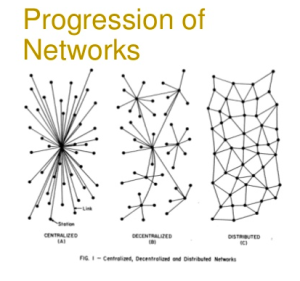 The original cMOOCs are based on long standing principles of open education and use open educational resources, i.e. they do not create content to go into the course, they use content that is already ‘out there’ on the web and ‘open’ and link to it. This avoids issues of copyright. xMOOCs build their content within the course platform and this is copyrighted, i.e. it cannot be taken and freely distributed outside the course.

cMOOCs connect participants and resources through immersion. They are intended to be disruptive, and to overwhelm participants.

MOOCs were not designed to serve the missions of the elite colleges and universities. They were designed to undermine them, and make those missions obsolete’ (Stephen Downes – The Great Re-Branding)

Through this they hope that participants will learn how to navigate complex learning environments and be critically selective in lines of enquiry they choose to follow. This model of learning is intended to reflect the current learning climate and environment in which we exist, i.e. a complex fast changing world where there is far more information available than we can ever hope to cope with or keep up with. cMOOC instructors model behaviour, but because the cMOOC environment is dynamic and continually changing, students cannot replicate the instructor’s behaviour – they have to self-organise. In contrast xMOOCs have adopted more of a transmission model of instruction.

Key activities in cMOOCs are remixing and repurposing, i.e. that content will be created, ideally co-created, through interaction with freely available open resources. Most xMOOCs do not allow for this, although I think EDcMOOC may be an exception, but I wasn’t a participant and this would need to be confirmed.

In a talk that George Siemens gave last night  ‘What are MOOCs doing to the Open Education‘ –  he said ‘Easy trumps ideology’ and that ‘openness’ is the cornerstone of innovation and creativity, but that the original meaning of openness associated with cMOOCs has become confused by the way in which xMOOCs have been designed. Openness is hard work. It is more than open access. xMOOCs according to George Siemens have taken the easy route. But despite this the advent of MOOCs of all types is disrupting traditional forms of education.  He also quoted Jon Dron’s comment ‘Soft is hard and hard is easy’, which I interpret to mean – it is easy (relatively speaking) to create a platform, such as Coursera, but hard to develop a learning space in which flexibility and creativity thrive.

Ultimately, whether we go down the cMOOC or xMOOC route (or a hybrid route) will depend on our fundamental beliefs of what education is for, either as teachers or learners (our educational philosophy). xMOOCs have attracted thousands of learners, so presumably thousands of learners are benefiting or believe they are benefiting. We still need more empirical research on learning in different types of MOOCs. I have learned from the two xMOOCs I have participated in and appreciate the skill and efforts of the tutors and what I have learned from co-participants, but for me cMOOCs remains the ideal. CCK08 was a transformative experience. It changed the whole way in which I think about education and I am still learning from that experience 5 years later.

Finally, I do not really see xMOOCs and cMOOCs as a dichotomy. For me there are the original cMOOCs which follow the principles clearly laid out by Downes and Siemens, which I have tried to summarise here, and the rest, which can be a whole mishmash of different approaches which offer more to less autonomy, more to less diversity, more to less openness and more to less interaction dependent on the platform they are offered on and the extent to which the principles summarised above are followed.

Dron, J. (2011). The Nature of Technologies. Presentation to Change 11 MOOC. Retrieved from: http://change.mooc.ca/week11.htm