The question in the title of this post was raised by Caroline Haythornthwaite in her keynote presentation for the Networked Learning Conference 2016. Metaphor became a theme which ran through the conference, following this opening keynote. 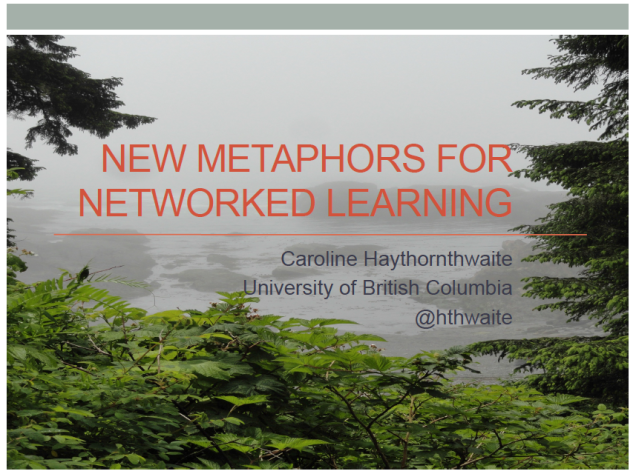 I found this a difficult presentation to follow at the time. It was very densely packed with information, delivered fast and the slides contain a lot of text, so I am grateful to Caroline for immediately posting the link to her presentation, giving us an opportunity to go through it all again. https://haythorn.files.wordpress.com/2016/05/haythornthwaite_nlc2016-pptx.pdf 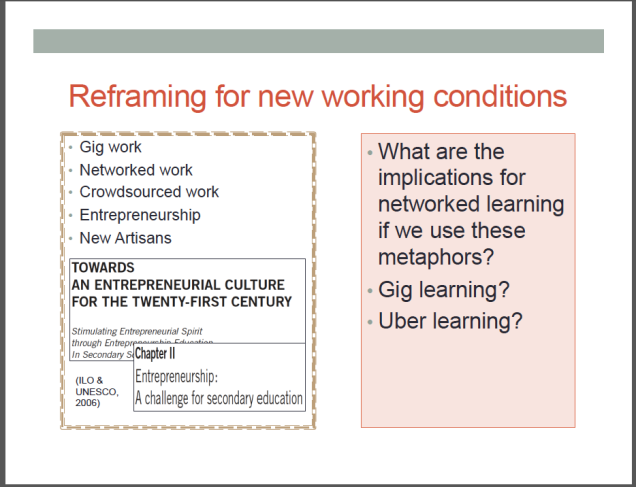 A quick search on Google suggests that the implications might be that we see more posts like this ‘5 skills of the Gig Economy’ by Joseph Aoun.

Metaphors are powerful, even essential to our understanding. Iain McGilchrist in his book on how the left and right hemispheres of the brain influence how we perceive the world around us, has written:

Metaphoric thinking is fundamental to our understanding of the world, because it is the only way in which understanding can reach outside the system of signs to life itself. It is what links language to life. (McGilchrist, 2009, p.115)

Metaphors help us to think differently, see alternative perspectives and ‘unflatten’ our thinking (Sousanis, 2015). An example of a metaphor used by both Caroline (Slide 4) and Nick Sousanis (p.18 in his book) and taken from Lakoff and Johnson is reframing ‘argument as a dance rather than war’. 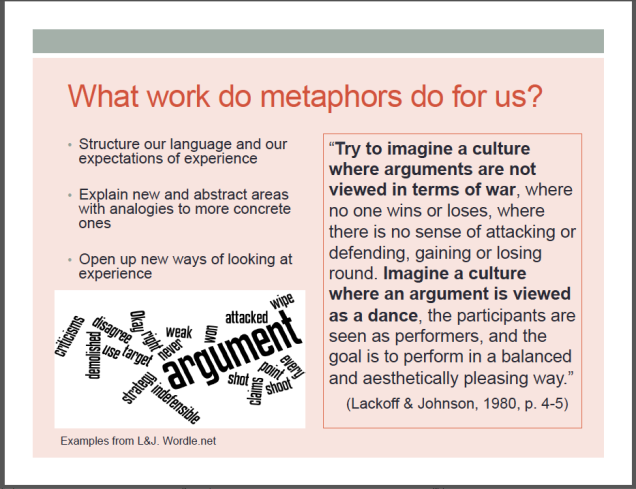 In my own recent work, with Frances Bell and Mariana Funes (2016, p.80) we have written that metaphors need to be treated with caution.

Lakoff (1992) points out that metaphors are asymmetric and partial and Morgan (1997) writes of metaphors, “in creating ways of seeing they tend to create ways of not seeing” (p. 348). Metaphors shape the way we see and the way we act, they enact a particular view and can be “self-fulfilling prophecies” (Lakoff & Johnson, 2008, p. 132).

By using the Gig metaphor to create a list of skills, what skills do we exclude? What do we fail to see?

These questions about the pros and cons of metaphor relates to another theme that ran through the conference; the meaning of ‘open’. I hope to think about this in more depth in a further post, but Richard Edward’s work (referenced in Sian Bayne’s keynote and her presentation with Jen Ross) discusses the relationship between openness and closedness (Edwards, 2015). He writes:

….all forms of openness entail forms of closed-ness and that it is only through certain closings that certain openings become possible and vice versa (p.3)

So in any form of discussion about new metaphors it will be necessary to consider the limitations of the metaphor. These are complex issues. Roy Williams (@dustcube on Twitter), who was not at the conference but who has seen Caroline’s presentation, wonders if we avoid engaging sufficiently with complexity because it is too much for us; we are like people who are hungry for ideas, but keep walking quickly past the chocolate-ideas shop, because we think they might be ‘too rich’ for us.

I would have liked to have spent a bit more time in the chocolate shop, maybe with a workshop (or similar) after Caroline’s keynote to play and experiment ‘with possible metaphors to guide us on the way forward’ in these changing times (Haythornthwaite, 2016).

McGilchrist, I. (2009). The Master and his Emissary. The Divided Brain and the Making of the Western World. New Haven, London: Yale University Press

6 thoughts on “Networked Learning 2016: Do we need new metaphors?”