Rome, like Venice,  is a city known to be notoriously difficult for people in wheelchairs to visit. I am writing this post as the partner of a wheelchair user, to share some of our experiences of this beautiful and fascinating city.

Of course, before we went we did our research which confirmed, from lots of comments on Trip Advisor and the like, that we would find Rome difficult, but also that it was worth the effort, so we spent some time planning how to reduce this effort.

Questions we tried to answer before we went.

We know that Manchester Airport, where we flew from, is good with people in wheelchairs, but what about Rome airport? We spent a lot of time trying to organise an accessible taxi (i.e. one with a ramp or lift) to take us from the airport to the hotel. In the end, after hours spent on the phone and online, we gave up. Instead we decided to take the train from the airport to the city centre. We didn’t pre-book, but just turned up on the platform. It was so easy and a fraction of the cost of taking a taxi.

Right up to the day before leaving we kept changing our minds about which wheelchair to take – should it be the fold-up one that would go in a taxi and was light to push, or should it be a heavier unfolding wheelchair with a bike attachment (tracker – as in photo)? Ultimately we decided on the tracker (the best decision we made), which wasn’t damaged on the outgoing or return flight, to which a good-sized rucksack would attach on the front, and which we discovered would not only go up steep curves, but also over big cobbles.

We couldn’t get in a taxi with this wheelchair, but we could get on the train and we just squeezed onto the hop-on/hop off bus, where passengers were very tolerant in edging past us.

On choosing a hotel, we followed the rules we always follow. The hotel must be central, so that as much as possible it is within walking distance of the main sites. The bedroom must be big enough for a wheelchair and the bathroom must be wheelchair friendly. We booked the Ariston Hotel, near the train and bus station. This worked really well as we were able to walk to and from the station in less than five minutes and to all the key sites, although we did get the bus to Vatican City (we walked back though!). The Ariston was not perfect, but we have no complaints. It was not as spacious as it appears on their website photos. In particular the corridors were very narrow, the lift was tiny, the bar was up some steps, and our bathroom was right on the edge of being wheelchair friendly. But by moving a bit of furniture around and doing quite a lot of lifting in the absence of well-positioned grab-rails in the bathroom, we managed. The hotel staff were very friendly and helpful and the breakfast was extremely good and certainly enough to set you up for the day. The other good thing about the hotel was that it was very near a lot of good restaurants. Getting about in Rome

There is no doubt that Rome is difficult for a wheelchair user. Many kerbs are very high and do not have ramps. Most surfaces are cobbled, which along with gravel is a wheelchair-user’s nightmare, and some sites and restaurants are inaccessible. But despite this there’s plenty to see and do. This was our first time in Rome, so we took the approach I will describe below, an approach which depends on being reasonably fit.

We decided to walk/ride and observe from the outside rather than try to get into sites such as museums, although we did get into St. Peter’s Basilica, the Vatican Museums, the Pantheon and Santa Maria Maggiore. 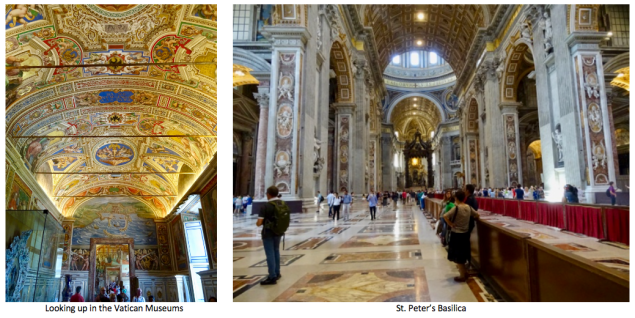 The Santa Maria Maggiore and the Pantheon were free, but for those sites which charge, such as those in Vatican City, the good news is that not only do disabled visitors and their carers go in free but also don’t have to queue, being taken by a different route to the front!

It was very hot whilst we were in Rome – 30 degrees or above on most days. Although we walked/rode about 10 miles a day, we made an effort to stay on the shady side of the street and drink plenty of water – common sense really.

We tried to avoid hugely crowded areas,  or only stay for a very short time, e.g. Trevi Fountain. In my opinion and that of my partner, The Sistine Chapel is really not worth it for a wheelchair user. As an able-bodied standing person you are shoulder to shoulder with hundreds of others. For a wheelchair user this means you are pushed up against hordes of people at below waist height – not pleasant. In this hugely over-crowded space I got no sense of the beauty of The Sistine Chapel and even more annoying was the voice over the tannoy shouting at us to be silent! (I found when I worked in schools that if you want silence, you whisper!). So, either book a special tour for just a small group to visit the Sistine Chapel, or give it a miss and buy some photos.

It is possible to avoid the crowds though. We did this by roaming through the back streets and visiting sites such as the Circus Maximus. The video makes it sound noisy, but I wasn’t aware of the noise at the time, or at least didn’t find it troubling.

The most important lesson for us was …

You either need three wheels or four big wheels (a sturdy scooter), ideally assisted by battery power. A regular wheelchair with small front casters must be a nightmare – extremely hard work for whoever is pushing (we did see some). Even if you tip the chair backwards, so that it is only travelling on the two back wheels (which is the only way to get across cobbles without rattling the wheelchair occupant right out of the chair), there are so many difficult surfaces in Rome that this could not be sustained for very long.

The system we use is a Batec – expensive, but so worth it.

We only scraped the surface of Rome, in the four and a half days we were there, despite being out for about seven hours each day. I would love to return and see more. Hopefully we will be able to do this. If you are a wheelchair user, don’t be put off by the bad press Rome gets in relation to access. It is definitely possible with a bit of fore-thought. The people are very helpful and I got the impression that the city is doing its best to improve access, but, unsurprisingly for such an ancient city, there remains a lot to do. You don’t need to plan out every detail or even to go very far. There is something beautiful to see on just about every corner in central Rome.  It is such a special place to visit.

And for a similar post on visiting Venice – see https://jennymackness.wordpress.com/2014/09/27/visiting-venice-with-a-wheelchair-user/  We used the fold-up light-weight wheelchair when visiting Venice. Here are some photos – https://www.flickr.com/photos/jennymackness/albums/72157649650530148

One thought on “Visiting Rome with a Wheelchair User”