We are now in the fourth week of this E-Learning 3.0 open course/MOOC. The task for this week is to create an Identity Graph, which Stephen Downes (convener of this course) has outlined as follows:

Here is my graph, which I created using Matthias Melcher’s Think Tool – Thought Condensr, which is very quick and easy to use. 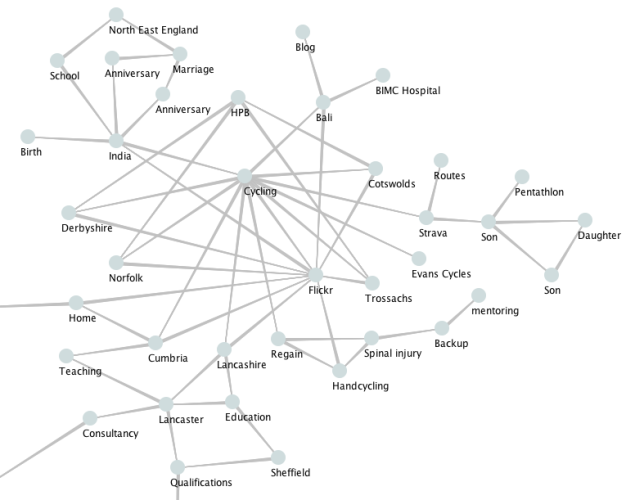 Like Matthias,  I puzzled over why Stephen required that the graph – “should not contain a self-referential node titled ‘me’ or ‘self’ or anything similar”. How could I avoid this if the graph is to be about my identity? In the event, it became obvious that not only is it possible to create the graph without referring to me, but also that doing this clearly demonstrates that knowledge of my identity is in the network rather than any specific node. My identity begins to emerge from the graph, without me having to specify it.

You can see from the graph that there are three links which don’t connect. I did this by simply cutting them off for the screenshot of the graph, because I wanted to suggest that this graph could, in fact, go on and on. This image provides only a glimpse of my identity. I could not only expand the graph, by making more links and connections, but I could also make more connections within this section of the graph. I am also aware that if I started afresh and drew this tomorrow it would be different because my identity and how I think of it is fluid and evolving.

I was also aware in drawing the graph that pretty much all of it is traceable online. It reminded me of the introductory task that was set on Etienne Wenger’s online course  Foundations of Communities of Practice that he ran with John Smith and Bron Stuckey in 2008. The task was based on the idea of six degrees of separation. “Six degrees of separation is the idea that all living things and everything else in the world are six or fewer steps away from each other so that a chain of “a friend of a friend” statements can be made to connect any two people in a maximum of six steps” (see Wikipedia). At the start of that course we were given the name of an unknown fellow participant and had to find out enough about them to be able to link to them in six steps and then share this information. This was a very good way of learning more about fellow participants at the start of the course, but also of recognising that we can easily connect to anyone across the world in just a few steps.

Stephen set some further optional questions for us to consider:

They seem to be physical and historical, whereas Matthias’s graph seems to emphasise the conceptual.

I think it must be unique. The nodes are not unique, but the relations between the nodes, whilst they might not be unique individually, as a whole must be unique. I think it would be impossible to guarantee its uniqueness if it remained static. Anyone could come along and copy or mimic it. Uniqueness can only be guaranteed if the graph is continually updating, evolving and new connections are being made. I am not sure whether old connections can be broken, or do they just become inactive and move way off to the edge of the graph?

I’m not sure if I have understood the question correctly? Isn’t the graph I have created using Matthias’s Think Tool, and posted here, a physical instantiation? Does physical instantiation have a specific meaning in relation to graphs? I think I might have missed the point – but I can see that it would be relatively easy to intermingle my graph with Matthias’s graph. It might be necessary for us both to add a few nodes and links, but not many, to be able to connect the two graphs fairly seamlessly (a bit like the six degrees of separation task described above).

This is a big question as it raises the whole question of what we mean by truth. I have been grappling with this for quite a few months now. In my most recent blog post about ‘truth’ –  I reported that both Gandhi and Nietzsche have expressed the view that “human beings can only know partial and contingent truths and perspectives; there are a multiplicity of truths and perspectives.” So in these terms, the truth of my graph can only be partial or contingent. Even if I have not knowingly lied, I have selected what to include in the graph and therefore I have also selected what to leave out.

In information systems design and theory, single source of truth (SSOT) is the practice of structuring information models and associated data schema such that every data element is stored exactly once. Any possible linkages to this data element (possibly in other areas of the relational schema or even in distant federated databases) are by reference only. Because all other locations of the data just refer back to the primary “source of truth” location, updates to the data element in the primary location propagate to the entire system without the possibility of a duplicate value somewhere being forgotten. https://en.wikipedia.org/wiki/Single_source_of_truth

In these terms I’m not sure how to answer Stephen’s question about ‘source of truth’. If someone could enlighten me that would be great.