Nick Sousanis’ Grids and Gestures 5 day online exercise has come to an end. It’s been a while since I’ve felt so engaged in an online activity. It was a lot of fun and I particularly liked the diversity of the group who participated. Aras Bozkurt tells us that there were 208 participants and 762 interactions. 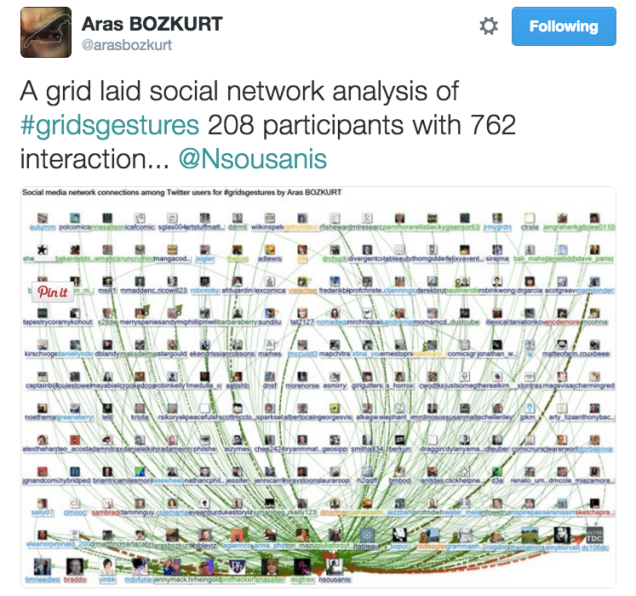 I provided links to details of this comic drawing activity in my last post, so I won’t repeat them here, except to say that for me it was less about drawing and more about the impact of visual images and drawing on perception. And I will also say again that Nick Sousanis’ book – Unflattening – (which provides the background to this exercise) is fascinating, thought provoking and visually stimulating.

The task/exercise was to draw the shape of our day in comic format, ideally (at least to begin with) in grid format and without any text. On the first day (Tuesday for me as I discovered the activity a day late), I followed the rules.

I had just finished reading Nick Sousanis’ book, so although I didn’t reference it whilst drawing, I know that his use of black and white, and his drawings that depict direction, influenced me. I was on holiday so I only had a pad of lined paper and a black pen. I drew without any other aids. It didn’t take me long. The trickiest bit was working out how to add the photo I took of the drawing to Twitter. It is the first time I have added an image to a tweet. It’s interesting to remember that the difficulties people encounter with online activities are sometimes those we don’t expect.

On Wednesday I took a slightly different approach. Whilst my Tuesday drawing was about feelings, Wednesday’s drawing was of places and I made some attempt to connect the grids. On Thursday I abandoned the grids. I’m uncertain about the outcome – too busy?  But it does tell the story of my day.

On Friday I spent most of the day working on a research paper, topped and tailed by physical activity. This wasn’t easy to depict. Again I abandoned the grids. I tried not to get hung up on a perfect outcome, or even an aesthetically pleasing outcome, but simply to think about how I could depict the shape of my day. I like this even less! 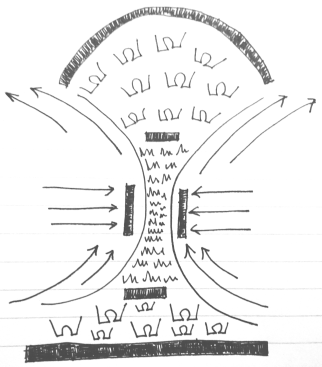 By this time I had seen many other examples – Click here for the Twitter stream full of wonderful work. I was intrigued by how some people did completely their own thing right from the word go. Was this deliberate, or had they simply not read the exercise instructions? Possibly the latter because half way through I realised that I had missed the bit about size of panels, shape and orientation.

Comics are static – and it’s in the way we organize the space that we can convey movement and the passage of time. Unlike storyboards, to which comics are frequently compared, in comics we care not only about what goes on in the frame, but we care about the size of the panel, its shape, orientation, what it’s next to, what it’s not, and its overall location within the page composition. The way you orchestrate these elements on the page is significant to the meaning conveyed (http://spinweaveandcut.com/grids-and-gestures/)

I never did get a handle on this.

Then there were the people who used colour and different media straight off – paint, pencils, pastels, even video. It made me wonder about the influence of colour on the outcome and also the influence of colour on how the drawing is interpreted. Even when I came home and had access to coloured pencils, I didn’t want to use it, although for my life drawing classes I love the use of colour. I haven’t yet worked out why this is so. There were people who used plain paper, coloured paper, squared paper. I noted that Nick himself used squared paper, so on the final day I went to the village shop and bought a pad of graph paper. Without this I don’t think I could have produced Saturday’s drawing. This was the most time consuming drawing. I wanted to try and do something that might vaguely resemble a comic, but I have mixed feelings about it and I would have liked a finer pen for the text.

There were also people who were clearly using some sort of drawing software, with great results, but I probably wouldn’t have joined this activity if it had involved using drawing software.

There are people who have blogged about the experience as I am doing here. See for example:

All these posts give a sense of how engaging this activity has been. And there are people who are not yet ready to let go, despite having done 5 drawings. They have learned something new about themselves. As Lisa Hammershaimb wrote

I have not yet got to the bottom of why this was, for me, such an engaging activity. Perhaps it was deceptively simple. Perhaps it was the group of people. Perhaps it was because the drawing was done, by most, by hand. Perhaps it was the pleasure and stimulation of seeing so many different outcomes (don’t miss the Twitter stream – there are too many great examples to include in this post).I’m pretty certain that part of it was down to just having read the book and seeing Nick Sousanis in action, posting his own drawings,

giving advice and encouragement, responding to participant comments and questions, retweeting participant drawings and generally being very present. It was also good to see the work of some of his past students, to see what could be achieved. It seems appropriate to finish off with those.

Thanks to all for this memorable experience.

This week there has been a flurry of activity on the #gridsgestures hash tag on Twitter as many people have responded to Nick Sousanis’  invitation to draw the shape of your day each day for a week, i.e. to take part in his Grids and Gestures- A Comics Making Exercise.  I discovered this activity on the second day, via Matthias Melcher, who has done some great drawings,  just as I finished reading Sousanis’ book ‘Unflattening’.  It was also Matthias who encouraged me to read the book which has helped to give depth to the exercise.

‘Unflattening’ is a gem of a book. Not only is it visually very compelling – a lovely object in its own right, but the text (which is presented in comic format and is no greater or less than the images) resonates so much with my own work and research. The book is an outcome of Nick Sousanis’ PhD dissertation which he presented in comic format. There is no traditional literature review, but the ideas are informed by historians, scientists, philosophers, educational theorists and artists, many of whom inform my own work.

So what does Nick Sousanis mean by unflattening? The book is about the narrowness and flatness of our vision and thereby of our understanding of the world around us. It is a plea for seeing beyond the boundaries of our current frames of reference, beyond the limitations of text, beyond the borders of the ‘flatlands’. It is a plea to imagine otherwise, to find different perspectives and new ways of seeing.

In support of this, Nick Sousanis points out that we see with two eyes, not one, and each eye gives us a different perspective. There is no one perspective. He reminds us that some of the most revolutionary changes of thinking in our history have come about through changes in viewpoint, for example the realisation that the Earth is not flat, its circumference can be measured (Eratosthenes) or that the Earth is not the centre of our universe but moves around the sun (Copernicus).

Like McGilchrist (whose work I have written about before), Sousanis reminds us that we tend to see only what we are looking for rather than see the whole picture. Others have recognised this. Stephen Downes (2014) has talked about this in relation to research methodologies and Checkland and Scholes’s work in soft systems methodology (2001) was about mapping different perceptions in order to better understand the whole rich picture. Sousanis draws on the work of Dreyfuss, Deleuze and Guattari, Bakhtin, Mandelbrot and others to drive home the point that differences are essential, that we need to hold different ways of knowing in relation, that we need views of our own and others and that we need to overcome linear static views through shifts in awareness. As flatlanders, our vision is limited. We need a different attitude, a different orientation, a multi-dimensional view.

Sousanis  discusses how traditionally words and images are not equal partners (text has the upper hand) and given that language is the means by which we give shape to our thoughts then this defines what we see. He writes ‘While image IS; text is always ABOUT’. In comics words and pictures co-habit. Comics are the spatial interplay between the sequential and the simultaneous. This is illustrated in this image from his book ‘unflattening’.

Sousanis points out that perception is a dynamic activity in which we see things in relation, we negotiate experience. We create perception from a multitude of views. To experience another’s way of knowing we need to step out of our rut and take a leap of imagination. ‘We need a kaleidoscope of views that convey both our own dimensionality and dynamic capability (p.148) …… Understanding, like seeing, is grasping this always in relation to that’ (p.150).