Dark Matters is a 1 year interdisciplinary project funded by an Arts and Humanities Research Council (AHRC) Science in Culture Innovation Award ’which has been exploring the provocations presented to physics, fine art and social science/philosophy by entities, forces and dimensions that exceed human and technological modes of sensing and comprehension.’

The project team comprises Rebecca Ellis (anthropologist), Sarah Casey (artist) and Kostas Dimopoulos (cosmologist), all based at Lancaster University and supported by an Advisory Group made up of 2 theoretical cosmologists, 2 fine artists and 2 social scientists.

The end of project workshop was held at Lancaster University this week and was open (free) to the public, so I went along, despite the fact that I knew very little about the topic. Surprisingly it was not necessary to have extensive expertise in physics, maths, social sciences or art history to enjoy the day and learn a lot from the wide range of speakers.

Even if you don’t know anything about dark matter (matter that cannot be seen and accounts for most of the matter in the Universe – 95% of the universe is invisible), it doesn’t take too much of a leap of the imagination to realise how significant this must be for thinking about our social and physical relations to the world, and to speculate on what might be the impact of the imperceptible, the unseen. These ideas resonate with my recent thinking about the Absent Presence in online learning, unheard voices and questions about what it is that we don’t/can’t see, how this might influence or affect online learning and learners, and whether or not we can or should try to make the unseen, seen.

The project team’s questions for the workshop were more challenging.

Rebecca Ellis started the day by telling us that the imperceptible is more than invisibility beyond the human mind. The imperceptible might never be detectable, but can be speculated by mathematics. She referred to the work of Karen Barad on entanglement and nothingness and Levi Bryant on Dark Objects.

Kostas Dimopoulos told us about his contribution to the project as a cosmologist and pointed us to his recent article in The Conversation.

Sarah Casey discussed how she had approached the challenge of drawing the unseen, and drawing as a tool of investigation, drawing as bringing an idea into presence, drawing as drawing out and leaving a trace. Her work for the project was exhibited on the walls around us. 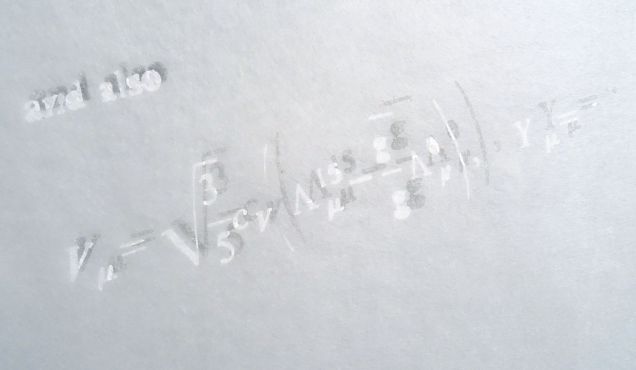 The first keynote was delivered by Roberto Trotto (theoretical cosmologist) and bore the title Cosmological Intangibles. Having now looked at his website I know why his keynote was so good. He is used to working with 10 year old children, i.e. avoiding jargon and making complex ideas accessible. He told us that what is visible is a matter of convention, because only a very narrow part of the electro-magnetic spectrum reaches earth. Our experience of the universe is limited by:

We use visualisation techniques and mathematical models to simulate dark matter, but we have to remember that visualisation is not neutral.

The next keynote was by Martin Kemp, Emeritus Research Professor in the History of Art at Oxford University, whose presentation focussed on Light Beyond Sight. His talk was illustrated with paintings by artists such as Michelangelo, Malevich and Piero della Francesca, which depict spiritual light, shifting sensory perception and the optics of uncertainty. He finished his talk by alerting us to the notion of visual deception, telling us that the eye is a deeply slippery deceptive organ.

We also had a keynote on radical indifference from Nigel Clark. I had difficulty following this talk, but the main question I took away was about whether the Universe is out there doing its own thing and if so will this make us more responsible, more ethical, open, moral human beings. Clark referenced Isabelle Stengers who in her work on cosmopolitics wrote that the earth is indifferent to the questions we ask. He recommended reading The Road by Cormac McCarthy and Fugitives by Anne Michaels. Also in this session was mentioned the work of the light artist James Turrell. This video was not shown as part of this workshop, but perhaps it is relevant, particularly since Turrell says that light has different behaviours when we’re looking!

Other speakers during the day were all very interesting and all challenged my thinking.

Klaus Mecke and Aura Heydenreich – ELINAS, Erlangen. ‘How is the unknown conceptualised?’

Jol Thomson, Technische Universität Braunschweig, and Sasha Engelmann, University of Oxford. Their talk was about neutrinos and the Ice Cube Neutrino detector. ‘The limits of our imagination determine what we can and cannot see.’

Fiona Crisp – Northumbria University. ‘How does art purposively engage with other disciplines?’ She talked about productive doubt and negative capability (John Keats)  ‘Meaning is shaped and constructed rather than received and observed.’

Finally, the keynote from Barry Smith explained that the purpose of the projects within the AHRC’s Science in Culture theme was to promote collaborative research between the arts and sciences to speed up innovation and promote new research agendas. He gave us an overview of the other projects that have been funded and pointed out that each project was subject to the 4 Cs of communication, confusion, conflict and collaboration. Interdisciplinary conversations have been challenging not only because dark matter is imperceptible, invisible and intangible, but also because we do not have a cross disciplinary shared language with which to discuss it. There are emotional connections to words in different disciplines. It was suggested that we need an embodied reaction to depict sense of something that is beyond our grasp.

This post has only skimmed the surface of the workshop discussion and conversation. Hopefully more information will be provided on the project website in time.