Anna Lovatt opened the symposium on The Materiality of Nothing at Lancaster University by discussing the work of Richard Tuttle. In the programme for the day she wrote:

This paper will trace Tuttle’s career from his early engagement with the artists of the Betty Parsons Gallery (including Agnes Martin and Ellsworth Kelly), to his scandalous retrospective at the Whitney Museum of American Art in 1975. I will argue that Tuttle’s pursuit of the zero degree can be understood as part of a career-long interrogation of the practice of drawing.

In a reading of her chapter in a forthcoming book Anna Lovatt interprets the materiality of nothing with reference to Richard Tuttle’s critical investigation of drawing, drawing degree zero. All the ideas in this chapter are new to me, and the chapter has not yet been published, so it has not been easy to follow this through. What follows is a personal limited understanding with a focus on the ideas which resonated with my own thinking and work.

Drawing degree zero relates to Roland Barthes ‘Writing Degree Zero’, in which Barthes was interested in creating colourless writing in the indicative mood middle zone (degree zero) distinguished from and between language and style. In a similar way Tuttle conceived line (the drawn line) as being in an in between zone of absence and emptiness that has little to do with signature or autobiography.

In the ‘60s when Tuttle was exploring these ideas drawing was being dismissed by artists such as Pollock and Rothko and an exhibition of his minimalist work at the Whitney Museum of American Art in 1975 drew heavy criticism from the art critic Hilton Kramer, who wrote that if less is often considered to be more then ‘in Mr Tuttle’s work, less is unmistakably less… One is tempted to say, where art is concerned, less has never been as less than this’. Anna Lovatt pointed out, with some irony, that in the case of Tuttle’s exceedingly minimal work, less had clearly become excessive!

Like Barthes, Tuttle explored how to stay in the neutral middle zone between the visible and invisible. He did this through working with white paper octagonals which he pasted to a wall of the same colour. Depending on your view you might or might not see these octagonals. 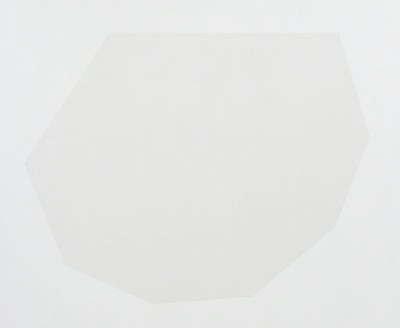 In this interview Tuttle talks about this work as follows:

I was doing white paper octagons on a wall at a museum in Dallas. And the critic came along and made mock introductions, “Oh, this is Richard Tuttle. He’s interested in impermanence in the arts.” And she said that to Betty Parsons, and Betty just immediately snapped back, “What’s more permanent than the invisible?” It fits in with the whole line—that in any art form, there has to be an accounting of its opposite condition. If you’re going to be a visual artist, then there has to be something in the work that accounts for the possibility of the invisible, the opposite of the visual experience. That’s why it’s not like a table or a car or something. I think that that might even be hard for people because most of our visual experiences are of tables: it has no business being anything else but a table. But a painting or a sculpture really exists somewhere between itself, what it is, and what it is not—you know, the very thing. And how the artist engineers or manages that is the question.

In 1971 Tuttle began work on wire octagonals. Anna Lovatt showed us his 10th Wire Octagonal, explaining that this work traces the outline of an absent object through three lines, the wire, the line and the shadow and introduced the notion of ‘shimmer’, which I understood to be the idea that the line is constantly shifting and moving because it is predicated on the position of the viewer.

Each is made in the same way from the same materials – graphite (pencil), nails, and florist’s wire. First Tuttle draws a looping line in pencil directly onto the wall. Next he places a length of thin flexible wire over the contour of the drawing, pinning it down so that it lies flat on the wall. While keeping each end of the wire attached by a nail, he then releases the wire so that it springs up and off the wall to create a new “line” above the original drawing. The released wire now casts a shadow, creating another line on the wall, which looks so much like the one in pencil that it is hard to determine which is which.

By allowing the wire to take it’s own shape Tuttle relinquishes control and out of this steps the shadow over which he has no control. So this art is about a space between no personal expression and expression. My tentative understanding is that it is in this middle, empty, intangible space, a space of absence, between something and nothing that creativity, new ideas, alternative perspectives can emerge. Maybe teachers and learners need to do more to pursue and negotiate this space.

This was an interdisciplinary symposium, held at Lancaster University, UK, about the immaterial/intangible, which aimed to bring together people with different perspectives to negotiate the imperceptible.

The seminar was introduced by Dr Sarah Casey – Lecturer in the Lancaster (University) Institute for the Contemporary Arts but also an artist who explores the limits of visibility and material existence.

Sarah asked us why we should consider the materiality of nothing, answering her own question by saying that ‘no’ thing implies the lack of ‘some’ thing and suggested that we tend to step around the intangible rather than try and deal with it directly, as exemplified by the Romans who didn’t have a zero in their numerals.

But as Sarah told us invisibility and immateriality are different. On reflection I would have liked a bit more discussion about this. On her website she asks  “at what point does visibility disappear and drawing become immaterial?”

In her introduction Sarah asked us to consider how we create something out of nothing and used erased drawings as an example of work that focuses on space and absence. With just a little research I can see that this topic has exercised a number of artists. For example Robert Rauschenberg explored the extent to which art could be created by removing marks rather than making them (see Erased de Kooning Drawing, 1953) and a number of other artists have explored invisibility and aesthetic absence. Interestingly, during the day, as we listened to presentations I sat next to artist Gerry Davies who was almost continuously drawing in a small notebook. I was intrigued by how he used the rubber on the end of his pencil as much as the graphite, creating and removing marks in equal measure.

Sarah suggested that we need absence and space for imagination, interpretation and reflection. I found just this 10 minute introduction to the day fascinating and am grateful that Sarah and Lancaster University opened this seminar to the public.

There were many stimulating ideas to come out of the day, which I hope to find time to record in at least one future blog post. Although my understanding of much of what was talked about is very limited, I am intrigued by all the ways in which we can align ideas such as invisibility, absence, silence, immaterial, emptiness, speculative, contingency, indeterminacy, invisibility and nothing, to teaching and learning, particularly teaching and learning in the online environment where it is so easy to be invisible to each other. This has often been seen as a negative aspect of online learning, but maybe this is a short-sighted view.

For those who are interested in the programme for the day – here it is.

The Materiality of Nothing Programme 14th July

I will start by saying that I do not draw to think, even though I do occasionally draw. I write to think, which is why I am writing this post. Let me explain.

The purpose of the symposium is ‘to extend conversations initiated by the AHRC funded ‘Dark Matters’ project which considered the provocations around Thresholds of Imperceptibility’ I attended the Dark Matters workshop at the end of last year and wrote a couple of posts about it.

For the symposium next week, the invitation from Sarah Casey included the following text:

The Materiality of Nothing is a one day symposium at Lancaster University bringing together practice and perspectives on negotiating the absent, unseen and unknown across art, science and social science. Across the arts and sciences that we call ‘zero’, ‘absence’ or ‘nothing’ remains a potent and powerful entity shaping the way we make sense of the world. It is staggering to reflect that 95% of our universe is invisible to human sensing; the provocation of the unknown and unseen is arguably at the core of creative thinking in the arts and sciences.

This event brings together a range perspectives on materialising the absent, unseen and unknown to reflect on the following questions:

For me this resonates with my interest in Absent Presence and also in what Peter Shukie has called the ‘voice of the voiceless’. In other words, how can we give voice to the voiceless and how we can become more aware of the influences of what is not in plain sight?

A final paragraph in Sarah’s invitation asks us to ….

…. bring along a drawing , notebook or object that could be described as something you think with. The principal editor of Drawing Research Theory Practice Journal  published by Intellect has been in touch and is keen to link up this aspect of the symposium with the journal.

This invitation has highlighted for me that I do not draw to think, although I am interested enough in drawing to know that many people use drawing to think. Here are a few people that come to mind. 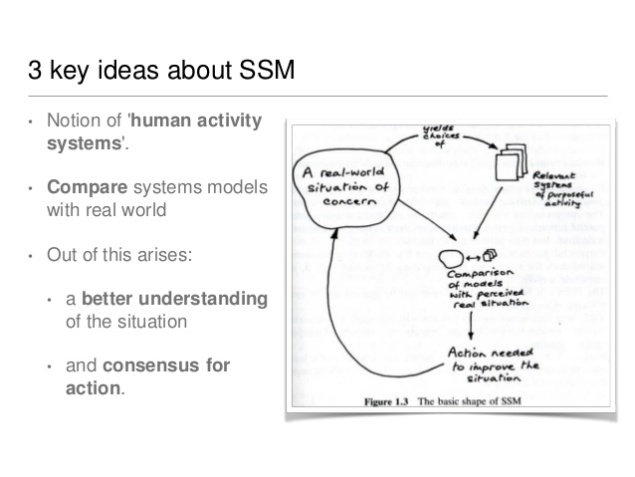 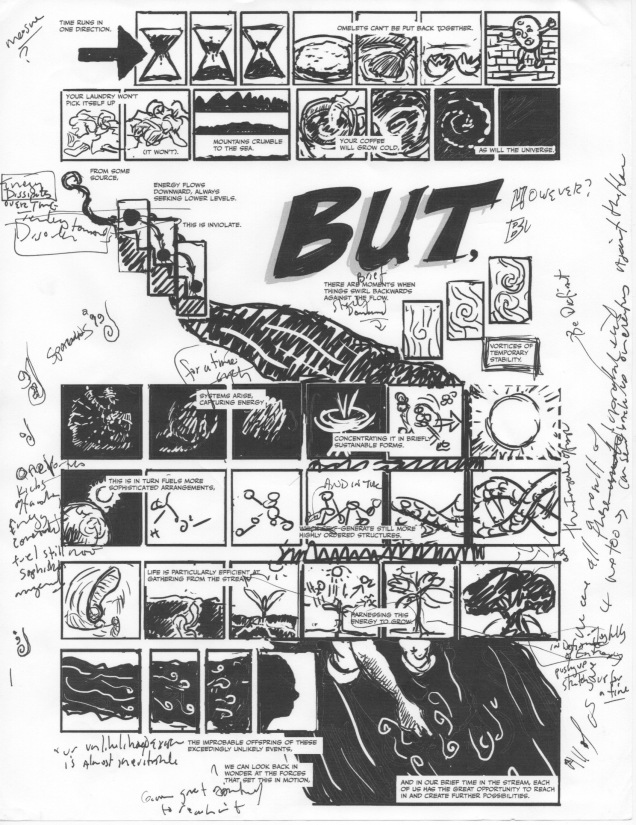 From the Research Theory Practice Journal website it is clear that the journal is interested in physical drawing as opposed to electronic drawing.

This journal seeks to reestablish the materiality of drawing as a medium at a time when virtual, on-line, and electronic media dominates visuality and communication.

This is interesting when artists such as David Hockney are using iPads for drawing. Hockney is on my mind at the moment as I will be going to see his portraits exhibition at the Royal Academy in London in September.

So knowing that I write to think, rather than draw to think, and knowing that the activity for the symposium next week really wants physical drawings rather than ’electronic’ drawings, I am a bit stumped. But I can only do what I can do, so I am taking along the following two examples of drawing/mapping that I do electronically. 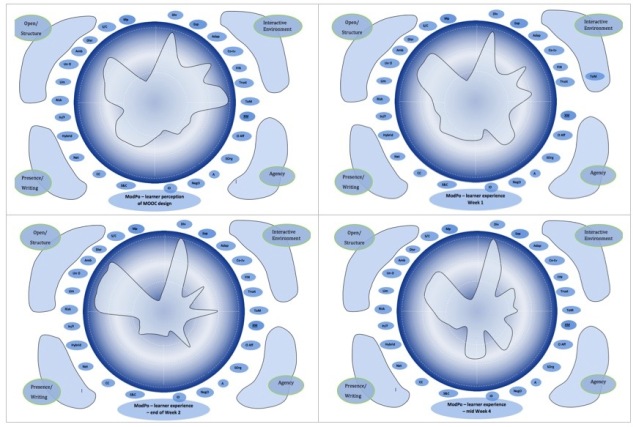 This example above is how I think about and reflect on any given learning experience. I use the Footprints of Emergence framework which Roy Williams, Simone Gumtau and I developed for trying to understand learning in open learning environments. This has been published as a research paper.  The ‘footprints’ above reflect my experience in the Modern and Contemporary American Poetry MOOC and were included in a book chapter that we published in 2015.

The second example is a mapping exercise

For this I used a mapping tool developed by Matthias Melcher to trace the development of my thinking through my research papers. I blogged about it at the time.

I suspect that neither of these is considered examples of drawing to think, but they’re as close as I can get.

I am very much looking forward to the symposium next Thursday.